This is a place I have been past by car, tram and foot always taking note that we must try it one day. It looks so inviting. What makes it more intriguing is that I would often see a waiter working in there whom I seem to recognise. But more on this later.

The name Merricote itself has such a nice ring to it.  If you didn’t know any better, you’d swear it is French. But it is actually derived from Merri Creek and Northcote and is located in High Street, Northcote, Westgarth to the locals.

It is the middle of the day and their phone is unanswered, so I use their online booking tool (Dimmi). Never having used such a thing (somehow for restaurant bookings, it is still nice to speak to a person who is on the other end writing down your details) and even when the email confirmation says there is no need to, I am still very tempted to call just in case. But, the day before, the minute I am about to dial the number (true story), up pops an email to confirm our booking. Of course, that makes me feel a little better but I am still not confident this technology is going to work. It isn’t until we actually arrive and the waiter notes our reservation in his book that I am truly convinced.

Merricote is a homage to pigs, cows and ducks, albeit fake ones. They are featured on the walls, the menus, napkin rings (remember those?) and even the bill comes with one of each in miniature format. Our son, Harvey, would love them.

The floors are polished concrete but the two rugs in the room do a great job in absorbing a lot of the noise. You can tell this was thought about and considered. So the perfect place for a date night. With the space-saving bar and coffee making areas placed against one wall, somehow you feel like you could be in a friend’s living room. Something else that appears thought about. A small room a little further in closer to the kitchen features an open fireplace making it that extra cosy. All this would have contributed to the warmth we feel where we sit because I am feeling so nice and toasty. I cannot say this about all places I have eaten in. 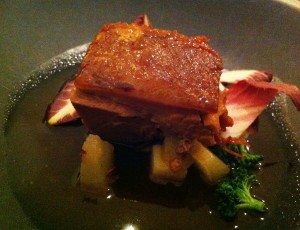 So let’s get back to the waiter. Being a little old fashioned I would like to call him the Maitre d’ because that is what he really is. Dean says he cannot remember any conversations of “Hey I know him from somewhere” so I must have had it with myself on several occasions. Or maybe it was with Harvey. Getting old before I even know it. So we are seated and Dean glances at the waiter and says to me with a wry smile “Hey, he looks familiar.” And, yes, he is. We know him from Hotel Max in Prahran, a beautiful old pub we used to frequent when living over that way. Most Fridays for early evening aperitifs, the three of us could be seen at The Max indulging in the best fries with aioli and bitterballen. It just so happens that the owners of Merricote, Rob and Bronwyn Kabboord, used to run Hotel Max. And, Hamish, our Maitre d’, obviously came with. I am so glad they moved our way because Merricote really is a gem.

Perusing the interesting but slightly disconcertingly laid out menu, Dean said let’s order one of each course – make our own degustation. Luckily, Hamish appeared just in time and said “No, that’s too much but I spoke with the chef and as long as it’s for the two of you, we can change it to a meat degustation.”  We are told earlier that the degustation menu was mostly seafood that night which Dean is not keen on (go figure, he loves fishing yet doesn’t really like eating it). So, we accept Hamish’s offer. I do love my meat.

So three hours later, we are totally and utterly de-gusted. At first I thought the food service was a bit slow but at the end of all this eating, I change my mind. They know exactly what they are doing. 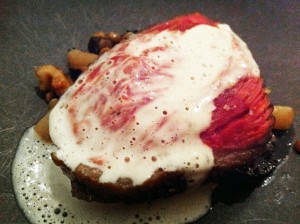 For the first time in my life (and even after living in London for four years), I try some black pudding. I really do love the garlic flowers that accompany this dish. Just writing about it is making me salivate! Black pudding wouldn’t be my first choice on any menu but it is certainly flavoursome and perfectly prepared. My favourite, though, is the 24hr pork shoulder with chunky chutney. So lean and with so little fat, how do that get that perfect crackling? I normally don’t eat rare meat but I guess there is no choice with the wagyu. I eat every morsel. One of the reasons I wanted to come to this place is because I heard about the cheese trolley and this does not disappoint. In fact, it surpasses my expectations. We have an extra serve unaware that is to be followed by dessert. The Dutch Mess arrives at our table and it’s one of those dishes you can just stare at in awe all night. Kind of looks like a fried egg, sunny side up. The eggwhite being beautifully formed soft clouds of white fairy floss; the yolk a perfectly round shape of orange sorbet. I have never been a fairy floss fan and even this dish cannot convert me. However, as you dig deeper into the orange sorbet, the texture changes, quite suddenly. Orange ice cream or maybe it is orange custard infused with orange rind – maybe it’s both. It doesn’t matter because it’s so delicious, I wish there is more.

For drinks, I stick to my one glass of wine all night and Dean chooses beer only. Normally, I would have more wine but on this occasion, I feel like I need to save my tastebuds for the food and I am glad I do.

The next morning, we are still marvelling at how special Merricote is. It’s not the cheapest place in town but it’s the type of place this area does need. A beautiful European Bistro. 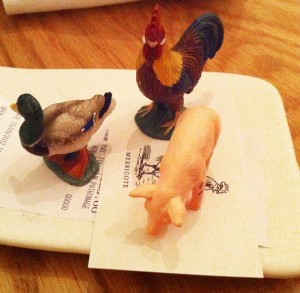